I’ve played Everquest II on and off for the last year or so but I’ve never fully committed to playing. My highest level character was a level 13 Kerra Brigand, with a smattering of lower level characters. Recently, though, Sony Online Entertainment has launched a new initiative: Everquest II Extended. 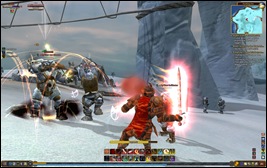 Everquest II Extended is SOE’s free to play model for EQ2, and to me at least it’s a triumph. For one thing, they’ve simplified the interface greatly so that anyone can dive in and play. The map includes highlighted areas that show where to go for the quests you have (highly reminiscent of the Carbonite add-on I use for World of Warcraft). The game also runs smoother for me then the full game. When I’ve played EQ2 in the past it would be a slow, stuttering affair. I’ve not had that with EQ2X.

Another boon to new players is that the different mechanics are explained plainly so anyone can understand them. For example, look at this early splash screen. 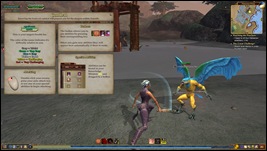 This can seem redundant for vets for for new players this is a huge bonus.

Of course, there are limits. If you play free, you can only use four of the races and eight of the classes. The other races are purchasable if you use the in-game store, but the remaining classes are locked unless you get the Gold subscriber package, which costs the same as regular EQ2. Personally I’d rather pay $15 a month for EQ2X over normal Everquest II, because I like the improvements they’ve made. Since I started playing a couple days ago I’ve already passed my old Brigand’s level on my new Human Berserker, and I don’t think I’m going to stop there. If you liked EQ2 in the past, or wanted to check it out  but didn’t want to buy the game, this is what you want. Alphasim out.

Posted by Alphasim at 3:46 PM No comments:

I just got done running through Q.U.B.E. beta 1.2, and it’s some of the most fun I’ve had in a first-person game in a long time. It definitely reminds one of Portal but it has it’s own feel, and with it’s various cubes to move with different attributes it was a nice puzzler. I’d love to see a larger, longer full version someday. Great work by the folks at Toxic Games.

Hey everyone. I’m still working on that StarCraft II review, so that’s on it’s way. Eventually. I’m kind of distracted by my new graphics tablet and drawing new work for my web comic, The Jockeys. My first comic with the new tablet is pretty shaky, but I’m getting better (and much better then my early comics, which always looked worse after being scanned in to my computer). I used to draw comics at random but now I try and update the comic every Sunday (I’ll be at six consecutive this week).

And that’s what I’ve done with my summer vacation.

This is going to be a personal rant, so if you’re not in the mood for that, I suggest you move on for now.

Everyone here ok with my ranting? Ok, let’s get started.

It’s always fun to realize your place in the world. Often times you learn you’re nowhere near as significant as you think you are. Case in point: after covering gaming here on e-AAGH.net for the last 5 years I recently attempted – for the first time – to ask game companies’ PR departments questions regarding products of their that I’m covering. Two prominent ones were Blizzard and OnLive. Now I know that ‘owner/webmaster of e-AAGH.net’ isn’t exactly internet currency but it’s humbling as hell to get completely blown off by these folks.

I’m not going to repost my varied queries publicly but they were – in my mind – neither invasive nor needy. I wasn’t asking for a scoop or some new information ahead of the big boys and I certainly wasn’t requesting special service. Most of them were of a clarifying nature, to be honest.

In truth I’ve not been personally been told off by anyone I’ve contacted. No one has said that they will not deal with me. Personally, I take the response I got more seriously: I got nothing. No reply, no automated message, nothing. That’s a real blow, that they didn’t think enough of my emails to reply at all.

Oh well, c’est la vie I suppose. I’ll continue my work as I always have, and occasionally, if a situation truly calls for it,  attempt again to be heard. Maybe someday someone will give me the time of day. If so, you’ll hear about it here first.

Posted by Alphasim at 4:43 AM No comments: