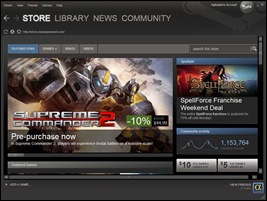 Valve’s steam has been an integral part of PC gaming since it’s launch with Half Life 2 in 2004. It had some growing pains, but now is indispensible and is a beacon of light for PC gamers, holding on against ‘experts’ who claim PC gaming dead time and again.

Now, Steam is getting a facelift. By logging on to Steam and opting into the UI Facelift beta, you can get an early peak at the future face of Steam. Personally, I like it. It’s sleek, and seems to load well. 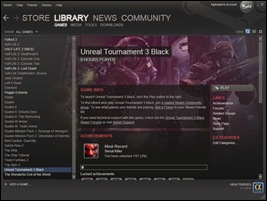 My only complaint is that it reminds me a little of Eve Online, which seems a little odd. I recommend all Steam users give it a shot, and then let Valve hear your opinions so they can get this right. Alphasim out.

Posted by Alphasim at 1:37 AM No comments:

Many probably haven’t seen it, but I’ve been writing My NBA 2K10 Player Chronicles since I got NBA 2K10 for PC back in the fall. Now, it’s set to be joined by a sister blog, My MLB 2K10 Baseball Player Chronicles. You can follow the pics below to reach them, although the latter doesn’t have much since the game launches next week.

My NBA 2K10 PC page mostly covers the ebb and flow of Rick Daniel, an all-around skilled point guard. Daniel started his career in Reno with the D-League Bighorns, but has since spent time in LA with the Clippers and now plays with the Orlando Magic. I occasionally cover my other players, like Sean David (who hasn’t been heard from in a while after quickly arriving with the Mavs following only 5 D-League games) and my newest My Player character, Reggie Anderson. I’ve drawn up trading cards for Rick and Sean so far. Here, take a look at one. 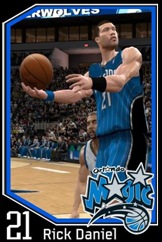 Not terrible, I’d say. Reggie will get one too, if I continue to play him. I’ll likely do similar for my baseball players too on the new blog.

Read the old blog, prepare for the new, and look forward to an MLB 2K10 review. Later,all.

Posted by Alphasim at 3:11 AM No comments:

The Xbox 360 demo of MLB 2K10 released at approximately 4:30 AM EST, and I was there to download it. My first impression was that it was a beautiful game, from the in-game graphics to the interface. And then I played it.

I won my first game 4-0 as the Phillies in New Yankee Stadium. I outdueled Andy Pettite as J.A. Happ, striking out four Bronx Bombers in the process. I also hit two homeruns in the first inning. At first I was fighting my timing, which seems changed from last year and feels more solid, but when I connected, I walloped the ball. I managed to whack a home run with a contact swing, so that’s proven to be possible. My lone gripe is that Ben Francisco won Player of the Game after going 0-2, striking out twice.

All in all, this is a good sign for the series. My hopes are high, but they were last year as well. We’ll see how it pans out.

Posted by Alphasim at 5:35 AM No comments:

The Return of Civilization

Civilization. The name is synonymous with turn-based strategy. Now, Civ is coming back, in the form of Sid Meier’s Civilization V by Firaxis. This has me all worked up. With the addition of a hex-based map and community features, I can’t wait. Expect a more full-fledged notice on e-AAGH.net proper soon enough.

Posted by Alphasim at 4:44 PM No comments:

I’m just getting further and further behind these days. I want to review Sims 3: World Adventures, but that’s months old now. I need to catch up with the times.

I’m also looking forward – via morbid curiosity, I suppose – to MLB 2K10. I rated MLB 2K9 as our worst game of 2009, so why am I looking forward to it’s latest installment? For one, it’s the only option for PC and Xbox 360 gamers when it comes to video game baseball. Secondly, they’re implementing My Player from NBA 2K10 into it, and I’m excited for that. I’m bothered that Microsoft hasn’t added as much as a notice to xbox.com and Xbox Live. Usually, upcoming games get a page on xbox.com to announce it’s features, show pics and videos, and generally prime it’s audience. With less then two weeks until it’s release, MLB 2K10 hasn’t gotten that treatment. It makes me wonder who’s fault this lack of information is: Microsoft or 2K Sports. Is Microsoft delaying any information on the subject, either through forgetfulness or neglect, or is 2K just not providing them with anything? A demo is expected next week (with information on such supposedly coming by the end of this week), so this should effectively be a non-issue in the end.

I just hope that 2K and Microsoft don’t know something about the game they don’t want to share, such as information regarding it’s quality. When a studio (movie, music, game, whatever) tries to quietly slip a release past the media and it’s consumers, that’s usually a bad sign. Not always, but usually. Fortunately this so far has none of the earmarks of such a disaster, but with the game’s predecessor being as poor as it was… I have to worry.

Posted by Alphasim at 4:20 PM No comments:

Gaming industry analyst Mike Hickey, as posted on IGN, is calling for a price cut on the Nintendo Wii to hold off Microsoft and Sony’s release of their new motion controllers. Naturally I have a few thoughts on that.

First, the Wii is already the cheapest of the three systems. A further price cut could put the ‘budget item’ thought in consumers minds. They could see it – accurately or not – as an inferior product to it’s competitors simply because it’s so much cheaper, similar to what happened to the Gamecube.

Secondly, these new motion controllers worry me. Lord knows I want them to work, and I love the concept behind Project Natal in particular. However, these controllers will not be standard. Even if they were to bundle these new products with their systems going forward –and they won’t - there would still be thousands of consoles out there without a motion controller. Think about what’s happened to the Xbox 360 and the uncertainty of their hard drive. Developers can’t assume a player will have a hard drive on their 360, so you can’t plan for it and you can’t take full advantage of it. That’s going to be the fate of these new controllers, I feel. Game companies are going to either have to design two control setups for one game or focus solely on these new motion controllers if they want to take advantage of Microsoft and Sony’s new toys, and I don’t think either would work well (half-assed control for the former, limiting their market for the latter).

I think this is going to be a rough going when these new forms of control launch for all three companies, but I hope that we as gamers will get some great new experiences out of it and that the Big Three know what their doing. Alphasim out.

Over My Head Again

Continuing my grand tradition of getting myself in over my head, I’m working on the next episode of the All or Nothing Bot Wars. Check out the link to find out what the buzz is about. The original series was a hit when released privately, and garnered – in it’s entirety – over 31 thousand views and no video rated under four stars. You can download a collection of the original series on the AON site, or watch them as many others have, on YouTube.

While I’m working on that, I’ve been trying keep up a Cleveland-area pro sports blog. I’ve always wanted to cover sports here, but I’ve found out time and again that covering the breadth of the sports world alone was nigh impossible for me. Thus, I’ve settled on just covering my local teams at the Cleveland Sportsfan Cave. Check that out, too.

I guess that’s all for now. I’ve got to get back to work. I hope everyone enjoys my hard work!

Posted by Alphasim at 5:55 AM No comments:

This morning I added my blog to the homepage of e-AAGH.net. How so? Wasn't a link always there? Yes, but now the content is as well. Thanks to Grazr, you can now keep up to date with e-AAGH.net from the site's homepage . Enjoy!
Posted by Alphasim at 5:11 AM No comments:

ABO on Course for Arrival

Despite it’s current lack of popularity, I’m continuing work on issue 2 of ABO: Random Fandom. Topics include a couple more ABO Head-2-Heads, an update on my NBA 2k10 My Player avatars and a quick history of Alazar. I’m hoping to make each issue better then the last, but if no one reads issue 2, that may be the end of ABO.

I’ve noticed that with the upswing in e-AAGH.net traffic that our most popular articles are our Game of the Year articles from over the years. That may prove that this hit bubble is due to burst any minute now. Again, if there’s anything you want to see on e-AAGH.net, let me know.Beta and I are always working on improving the site.

Posted by Alphasim at 2:24 AM No comments:

I'm just checking in quick to state that my Mass Effect 2 review is going to be running late. No surprise, huh?
For anyone interested, Gavelier's World of Warcraft has gotten two new comics in the last few days. Find a link to it on e-AAGH.net.
Finally, I'm making a transition to Google Chrome from Firefox, and so far so good. I like Chrome much better at the moment, but only time will tell if it can replace Firefox in my daily routine.
Posted by Alphasim at 9:36 AM No comments:

My long-overdue Torchlight review is up. About time, ne?

By the way, the problem with my copy Dragon Age Origins seems to be some of the people I share my main computer with who decided that they didn’t recognize the Dragon Age Origins Updater service and turned it off. I turned it back on, and it’s problem solved. Back to Ferelden!

I’ve posted my annual page on the current condition and future of e-AAGH.net, and I’ve now dubbed it the State of the Site Address. Catchy, huh? In any case, check it out.

On a sad note, my copy of Dragon Age Origins has – for whatever reason – decided that all of my content was unauthorized and has disabled me from using my saves. Now, I have the bill on my account where I bought the Collectors Edition, and Bioware’s site says I have the content. Apparently, it’s the game (which also occasionally refuses to connect to the Bioware network). I’m working on a solution, but had this happened prior to the Game of the Year awards, it likely would have had an impact. As it stands, though, it’s just an annoyance. Alphasim out.

Posted by Alphasim at 3:29 AM No comments: