I Suck at Halo Reach

It’s official: I’m no match for the Teenage Mutant Ninja Cyborgs that play online shooters anymore. Seriously, some people must be wasting their lives mastering headshots instead of doing something productive. I recently took a sojourn into Halo Reach’s online community, and it was a brutal wake-up call.

At that point I called it quits. There are those who say that the only way to learn in these games is to get mercilessly pummeled over and over. These are the people who’s head I would like to slam in a door for hours on end. The whole, ‘die and a millions times and then you’re good’ idea is an archaic concept. There has to be another way. It’s like saying, “I burned myself hundreds of times learning to make coffee, so that’s the way you should have to do it, otherwise you’re a quitter.” Logic, anyone?

I asked the game to match me with players of my skill level. Did it? Well, if the rank and lifetime kills of my opponents was any indicator, no. The reason being, this long after a game’s launch is a terrible time to try and jump into the fray. If you don’t start when the game comes out, the longer you wait the bigger handicap you’ll have. The reality is that the game could have looked for hours and not found enough players as green as I was to fill a match.

As for playing with friends, that’s a great idea. You get together with people you know, and there’s a comfort level there. There’s a problem though. If you were to look at my friends list, you’d see one person, that would be Beta. She’s the only other player I know who plays the Xbox 360. Omega plays with me but for whatever reason he doesn’t have an online account. Even then, both of them only play when they’re visiting me, because neither of them has a system of their own. Anyone who I meet online playing Halo Reach or the like isn’t going to be impressed with me as I get blown away time and again. They’re not going to seek me out to play later. So for me, using the friends list is out.

I honestly don’t know what I’m doing wrong here. From Call of Duty: Black Ops to Team Fortress 2 to Halo Reach, I’m taking my years of FPS skills online and being ripped to shreds. The truth is, I’m not bad at these games. I’m actually pretty competent – especially with a mouse and keyboard in my hands – and when I’m playing an even match I can rattle off the kill streaks. I’m just no match for the folks with hours of playtime under their belt and skills honed over dozens to hundreds of matches.

I may yet retire playing multiplayer games for future e-AAGH.net reviews if this trend continues. Time will tell.

Posted by Alphasim at 8:10 AM No comments:

I’m in the middle of reviewing NCAA Football 12, and it’s not been easy. Why? I can’t seem to pass the damn ball. Seriously, I can’t pass! Every ball I throw gets batted down or picked off. To that end I’m playing a running back in Road to Glory. However, there was recently a surprise.

I had to play makeshift QB for a play, and I completed the pass! Of course it was the second straight time we ran this play, so I had some idea what I was doing. The first time, I panicked – no one told me I was to throw the ball! – and got sacked for some 5+ yards. Dammit.

The review is still en route, so look forward to it soon.

Posted by Alphasim at 2:38 AM No comments: 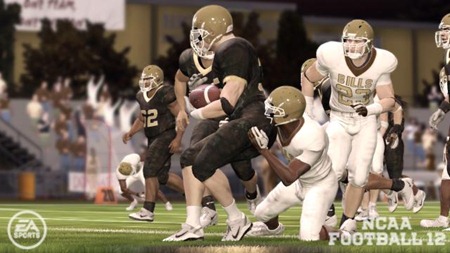 You can bite my... oh wait, you already are.

I’m playing NCAA Football 12 for review, and I wanted to share this pic fro my Road to Glory career. Bud Daniel got his a** bit by a defender. Kind of against the rules, don’t you think? 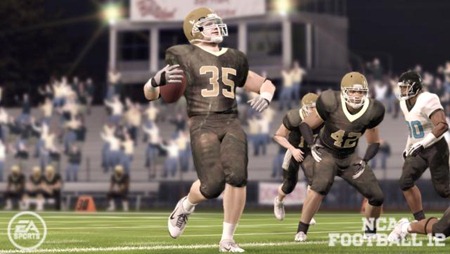 Nothing to see here, just me being awesome. Again.

Posted by Alphasim at 2:18 AM No comments: