I was discussing my computer the other day with someone when it dawned on me the language I was using sounded an awful lot like how one used to discuss their suped-up hot rods. For example, I described my computer as having “an AMD Athlon 64 X2 4800+ 2.5Ghz dual core, a GeForce 8800 GT with 512 megs on board, and 4 gigs of DDR2 667.”

Anyway, it sounded awful funny when I thought about it afterwards. Someone with no computer knowledge whatsoever would be lost – and that’s not even tech jargon, it’s just the the basic hardware I’m using. I would imagine I would react with a blank stare if someone told me about the custom mechanics under the hood of their car (I do not work on, nor really care about the inner workings of a motor vehicle). I’m not even going to make a fool of myself trying to a make a mock monologue, because as an someone (an actor I believe, I forget who exactly) once said, “You have to be able to do something right, to properly do it wrong.” So I’m just going to wrap this post up with a simple equation: Computers == nerd hot rods. Scary, no?

Posted by Alphasim at 6:01 PM No comments:

I’m still working on the new build of e-AAGH.net, and it’s coming along well. More importantly, though, is that I intend to review Out of the Park Baseball 11 soon. Check the game out at OOTP Developments. My goal is to get this review done by the end of the month.

Posted by Alphasim at 3:04 PM No comments:

Here’s a couple quick notes to get everyone caught up.

That’s all for now. I hope to have my review up ASAP for everyone to read.

Posted by Alphasim at 2:18 PM No comments:

Apple had their press conference on the iPhone OS 4 yesterday. I watched a live blog on Engadget as it happened since I obviously wasn’t there. Here are my thoughts.

Number one on my mind is obviously my excitement for multitasking. I like their interface they went with, and I think it should work well. The folder feature reminds me of the Droid OS personally. I actually joked sarcastically to a friend nearby – who owns an Android phone – that I was so happy that my iPod Touch was turning into an iDroid. On the subject of the Touch, only iPod Touch 3rd gen. are getting the full new OS. Touch’s of the 1st and 2nd generation are getting – for lack of a better term – dumbed down versions, as are iPhones 3G and earlier.

I’m less excited about the enhanced mail feature that allows you to have a merged inbox and more then one Exchange account, but it will be a nice touch. I’m more looking forward to the Game Center, basically iBox Live. It’s a take off of Xbox Live – achievements and all. How it will work with existing apps is anyone’s guess.

Lastly, I’m happy that they’re finally allowing wallpapers. It was nice to be able to pick an idle screen for when the device is locked, but now you can pick a wallpaper to go behind your icons.

OS 4 should be available sometime this summer for iPhone/iPod Touch and this fall for iPad. 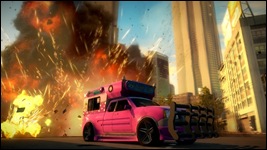 I am officially reviewing Just Cause 2, for anyone wondering. This game has it’s flaws but the carnage is hard to deny. Eidos just released new DLC with this pink car that you can buy from the black market in game, and it’s a riot. It’s nigh maxed out, stat-wise, and it’s fairly cheap, so of course I got one right away and went on a little rampage.

Here’s some quick bullet points on what I like best.

It’s a fun game, but I’ll have some things to nag about when the review comes around.

I posted last time that I was in a dead zone as far as what to review next. I also posited that Just Cause 2 was not going to be it. Those statements may both change soon.

Early this morning, after another late night World of Warcraft session, I decided I was going to try something I’d not really played yet. I narrowed it down to the demos of Settlers 7 and Just Cause 2. I had been in the beta for Settlers 7, so I opted for Just Cause 2. The preview for the game on Steam made for an interesting read, so I downloaded the demo right away. I was worried that I would be playing the game the same way my computer handles GTA4 and Red Faction: Guerrilla – with frame rates dipping into the single digits all the time. I was also worried that it was going to be like the original Just Cause’s demo, which never excited me.

Damn, was I surprised. The game’s default settings for my computer kept the frame rate around 30 FPS, and the gameplay was pure – for lack of a better word – chaos. I’ve not had free-form destructive fun like that since GTA: San Andreas, and I must say that I forgot how much I enjoyed it. I may pick this game up and review it yet.

Posted by Alphasim at 9:25 AM No comments: