Um, wow. Consider me shocked. NBA ELITE 11 is being delayed indefinitely right now by EA Sports. I didn’t like the Xbox 360 demo this year (then again, I’ve not really liked a next gen EA Sports basketball game to date) but this came completely out of left field. I personally didn’t think the demo was substantially worse then previous EA Sports b-ball games. It featured the same robotic animations, over-saturated coloring and stiff control as in past games, with some confusing new controller-input changes added on top. EA had allot to lose by putting this product head-to-head with NBA 2K11, which has a head of steam going, hype-wise, with the new features, improved graphics and the inclusion of Michael Jordan (something EA did back in 1999 with NBA Live 2000). However, this delay could be very dangerous to EA’s basketball brand.

First they renamed the venerable NBA Live series, giving up name recognition in the process. Now they’re missing the opening gate and giving 2K Sports a head start. This could lead to neutral fans who would normally flock to Live because of the name to go to NBA 2K11. What happens there is anyone’s guess. They may get attached to the new brand, or they could get turned off on basketball games as a whole. It almost gives me the vibes from 989 Sports’ NBA Shootout series that EA’s game killed off. 989 skipped Shootout 2002 (on the PS2) to perfect their product but never really got back in the game. Eerily, it was NBA Shootout that was originally trying new and unconventional things to hang with NBA Live on the original PlayStation (such as their unique create-a-dunk feature), which reminds me of the innovations EA has implemented to stay with 2K’s game (freestyle dribbling on the PS2/Xbox, ELITE’s complete overhaul on the PS3/360).

EA has scrapped a franchise in the past and it’s worked. Triple Play Baseball got a really bad reputation in the early 2000s for low quality, so EA shut it down and made a new game, MVP Baseball, that by many accounts was the best baseball game of it’s day (before 2K Sports locked up the MLB license and killed the series). That means that EA Sports isn’t on entirely uncharted ground here. They just need to be careful to not lose too much territory to NBA 2K11 this fall. Time will tell if they can. 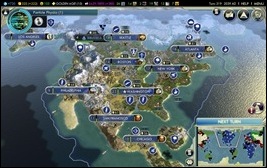 I’m still reviewing Civilization V, and I’m almost done. The game is – so far – one of my favorites of 2010, up there with Super Mario Galaxy 2 and StarCraft 2. I hope to have a review by Monday, but no promises.

Posted by Alphasim at 4:58 AM No comments:

Hey all. Sorry for the lack of updates, but I’m currently playing the living hell (I believe that’s a technical term) out of Civilization V. So far I’d say it passes muster, but only further playtime will tell for certain. Here’s a few bullet points on what I’ve seen so far.

I’ll post a full review when I get a chance. Thanks for your patience.

Quick update: NBA 2K11’s demo released this morning. I played it through a few times (not hard seeing as it’s Celtics at Lakers for one quarter) and came away impressed. The animations seemed improved over last season and the camera work was much more indicative of a live TV broadcast. The only flaw is that you can only play as the Lakers. I know some folks who won’t be happy about that, but it is what it is. Anyway, if you’re interested, go download it and give it a shot. Later, all.

Posted by Alphasim at 1:51 PM No comments:

I’m still doodling my web comic, The Jockeys, if anyone cares. It’s been much smoother sailing since I got my new graphics tablet and art program. Here’s my one of my latest comics.

I’m also working on – behind the scenes -  a manga-styled comic that’s not coming along quite as well as The Jockeys but I’m still working at it. Here’s a random page.

The story is convoluted as hell and this is just an expository sequence, so there’s not much for you to go on here, sorry. If this comic takes off I’ll likely share more at that time. Later, all.

Posted by Alphasim at 2:53 AM No comments: