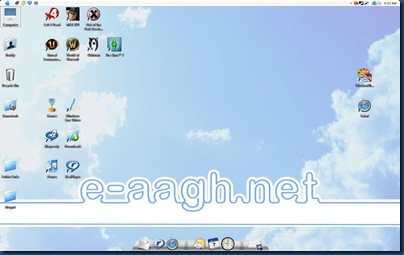 I’ve recently gotten bored of my computer. I sit in front of it for inordinate hours at a time, and I felt I needed a change. Call it a PC user’s mid-life crisis, but I felt like playing with a Mac. Of course, budget constraints here at e-AAGH.net preclude buying a new computer on a whim, so I did the next best thing: I skinned Vista. Using Stardock’s Windowblinds app, I applied a fan-made OS X Aqua skin. I also added Objectdock, a Mac-styled floating icon toolbar also by Stardock to further the illusion. Finally, I installed Safari to complete the gig, switching over from Firefox for now. I was happy with how it looked, but the performance was beyond abysmal. I couldn’t work at all due to slowdowns and crashing. I reluctantly unloaded the skin and toolbar.

About an hour later I began to question why my ‘puter was running so poorly with these changes. I looked it up and came to the conclusion that my antivirus was clashing with Startdock’s software, so I told it to ignore Stardock softs for now and reloaded everything. Bingo! I’ve been using it for about seven hours straight with no crashes or slowdown yet. During this time I downloaded some OS X Aqua themed desktop icons for my folders and such, replacing my Vista ones with more… Mac-like variations. Beta complained some, stating that I was giving the poor computer an identity crisis (“Which am I?! I don’t know what I am anymore!!” lol)

I’m enjoying myself right now, if only for the change of scenery. Would I consider buying a Mac in the future? Maybe a laptop, and then only to work on the site with. I’m too hardcore a gamer to leave my PC and it’s varied functionality behind. I get a buzz from successfully trying to max out my framerates with new hardware, and I don’t see most of my favorite games (well, most games period) available on the Mac. I’d rather put my money down on an Alienware or Falcon Northwest uber-gaming rig then a Mac (not that any of those are an option financially at this time). Still, I really like how the changed appearance makes the old feel new again, and with Windowblinds, I’m set to easily change it up when I get bored again.

BTW, I love my wallpaper. If people want a copy, lemme know and I’ll post a link to it here.