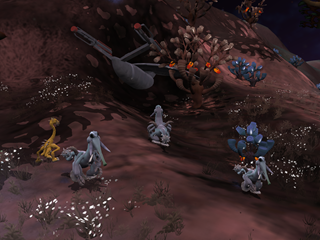 Hey all. Beta's back in town for the holidays, and she's been playing Spore recently. Yesterday she built up her first predatory species, the Opochs. These things are some of the funniest looking things you've ever seen, with elephant like trunks and tusks and goofy eyes. She befriended a giraffe critter, and took it along with her on her conquests in Creature phase, and it was so funny to see this Giraffe killing things. It was like, "I'm a carnivore, really!" as it tried to kill other creatures. We grew attached to the silly thing as it tried so hard to fit in. It was a sad time when it finally got killed, since neither of us knew where to go back to for more. Also during this game, Beta was buzzed by my Enterprise UFO that I use in my main game, which proceeded  abduct Bluubies while she was trying to eat them. She eventually found my ship crashed in the ground (see pic), which honestly didn't surprise either of us. I mean, it was my creation, y'know?

Later last evening she set forth to get the achievement for befriending 20 species in a single game. She ended Creature phase with nearly 30 allies, which was impressive. I can't do that; I'm not patient enough. Later, all.

Opochs shall rule the world.