APB: Alpha’s On the Case

I’m in the All Points Bulletin (APB) “Key to the City” event right now, and from what I understand, the NDA is off, at least to a limited degree. I’ll be brief in any case.

One thing I like is the awesome character creation tool. It’s allowed me to recreate my frightening visage in-game. If anyone’s every wondered what I look like, this is a fairly close approximation. 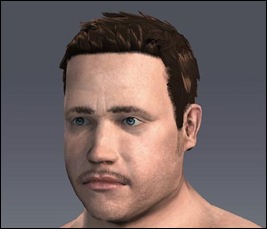 I may make Beta’s head too, just for kicks. In any case, the game was fun. I’ve only really rolled through the tutorial zone, but the last mission I played involved PvP – which the game didn’t tell me up front. I was just suddenly told that the rival faction was on to me mid-mission, and then a criminal showed up (I was an enforcer). He and I crossed paths six times during the course of this mission. I killed him three times, died once, shook him in my car on one occasion and finally completed the mission as he was desperately trying to gun me down, which made us neutral to each other again. Ha. Alpha: 1, Criminal: 0.

It’s a fun game, and one that warrants a review once it’s released. Later, all.