Wow, it’s been way too long since I’ve updated here. I’ve been really bad off the last month or so (sickness, family problems, and allot of other work) so e-AAGH.net’s entire range of content – game reviews, Alazar articles, The Jockeys comics, NBA 2K11 My Player posts, the whole shebang – have found  themselves more or less silenced. Today I hope to kick things back into gear, starting with a recollection of Betasim – my cohort, you know – and I taking to multiplayer Minecraft.

I’ve been a fan of Minecraft since last October, but only recently has Beta given it a shot. It took all of one session for her to get hooked, though. She plays constantly now, so since I’m hooked and she’s hooked, it only made sense to play together.

I wasn’t about to fork over $15 or so to some hosted server so I was going to figure out how to run one myself. Once I got it up and running (after a full 12-hour night trying to free up the port the server wanted) Beta got a copy of Minecraft and we tried to log in. However, running the server on the system I played on didn’t work. In fact, it actually screwed up my internet connection and forced my to restart my PC. So, that didn’t work.

We needed a third computer to function as the server, but Beta didn’t want to volunteer her work laptop for the job so we dug out an old, aging, creaky laptop to do the job. Once I got the server reconfigured there (including another protracted port-opening fight, mostly trying to get the main PC to relinquish control over the port) we tried to log in. I got in fine, but Beta couldn’t get in. It was always something!! I finally checked out her situation and she was just missing a number in her IP log in. Finally, with that sorted, we could at last play Minecraft together.

We spawned on a hilly, snowy world. We had a small cave on the shore of a bay for the first night that I stayed in and mined as she ran around with her new stone sword sword and fought zombies and spiders. By dawn she was ready to move on so we packed up our stuff and shuffled off. I lost track of her almost immediately but once we hooked back up I learned that she’d stumbled into a great cave. She’d made stairs into it and placed her workbench at the bottom so I helped hollow it out and dug an actual work room that I closed in with a door. We placed our forge, workbench and storage chest in there and I stayed  there and worked most of the time. Beta had come across iron and made herself a little hat to wear. 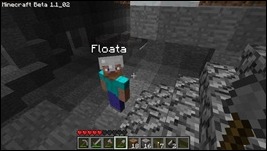 I just adore this pic. Beta, named “Floata” in the game, was hilariously cross-eyed with that helmet on. In any case, you can see our cave system behind her. After a few nights of baddies literally dropping in we finally finally closed off the huge gaping hole above our cave with a roof. Beta complained about not being able to find our cave, so we built signal towers. 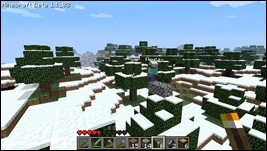 Here’s Beta placing a torch on a tree, while I built a signal tower from stone. We really should have built them much taller, but we didn’t think about that at the time (more on this later). She could then find our cave, but not the entrance so built a large stone entranceway over our staircase. At one point I stood there working on it when I heard the tell-tale “sizzle…….BOOM!” of a Creeper. I was unharmed, but a few blocks behind me was a massive crater. He also did no damage to anything we’d built but somehow still managed to knock the torches off of my signal tower. 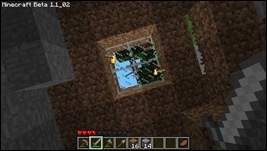 I basically functioned as Suzie Homemaker as Beta played the hero most of the game. Here’s my glass skylight I built in our cave, with Beta standing upon it. Speaking of Beta the Hero… 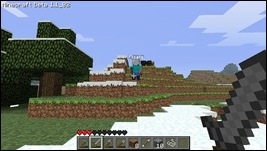 I assualted a spider but he knocked six hearts off of me (the laptop I was on lagged absurdly badly so I was working with a handicap the whole game) so I called Beta to kill another nearby spider so to get string for a bow. We got two total string so there was to be no bow for us. 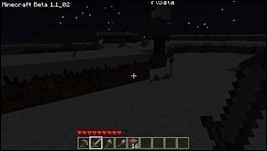 I like this pic of Beta surrounded by arrows from a skeleton. No big story here, just a funny pic. Eventually we set off for adventure (I followed her because she… well, she’s easily distracted by shiny objects so she couldn’t really follow me without getting sidetracked) and found a deep cave that was to be our great conquest. 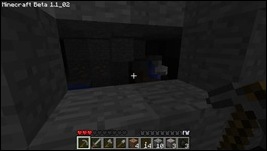 Here you can where I dug up a wall and found flowing water. That was to be the least exciting thing down here, though. 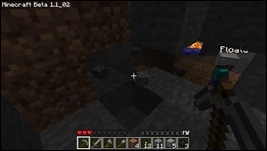 Beta and I eventually found lava. We ended up building a workbench and forge down here, planning on completely emptying the place before we left. In hindsight this was a bad, bad idea because I had almost no health and she wasn’t much better off.

After crossing a few skeletons, zombies and creepers we decided to try and leave. The only problem was that we  couldn’t remember how we got in there! While trying to get out, Beta fell into a room with a skeleton. I was badly injured when I jumped down to help her but unfortunately died upon landing. Dammit. She died not long after that. We respawned back where we started in the dead of night. We attempted to find our signal towers but that went poorly. See, we should have built them taller! I suggested we stick together for survival but Beta insisted that we could cover twice as much ground apart vice together so we split up. Over the following day, night and the day after that, we searched. It then became apparent that we did not know where each other were. Finally as night fell we had to hole up for the night. 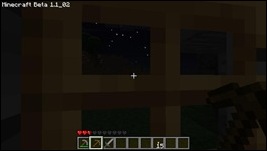 Here I’m looking out of my new hole in the wall, cold and alone.  The next day I took off too find Beta but when I noticed that I had reached a sunny green area and had started to cross into a desert-esque biome I realized I was way the hell across the map. She was still in snow!! I was also on the west coast while she resided on the east coast. I truly don’t know how that happened. I finally figured that I had gone too far south and west and needed to go north-east to find her. I walked the whole day north before finally finding snow. The only thing I could possibly do was hope that she was in the frozen north and the arctic south. However, before I could possibly learn whether I was right or not, this happened. 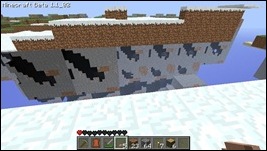 Uh… hmm. Ok. That’s not natural, that’s for sure. Maybe if I get close and take some more pictures… 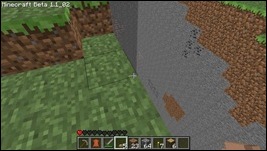 Wow, it s a huge hole! Sometimes it’s there, other times I fills up. Oh, it’s filled up again. I’m going to try and cross it while it’s still here. 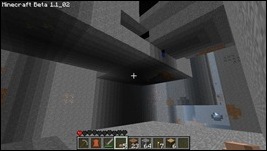 Crap, it disappeared again while I was on it. Ok, now what?

Take a break, that’s what. And so now, with over 1200 words in this post, I’m also going to give you guys a break. Hopefully Beta and I will play more in a day or so. I just hope I can get out of this hole!! Later, all.