Ready to Hang Up my TF2 Gloves 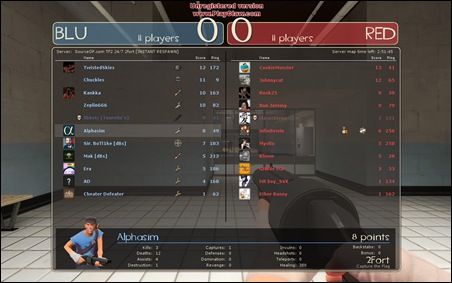 I think it’s time I quit playing Team Fortress 2, and the above picture is a small glimpse into why. It’s not just the 3 kills to 12 deaths you see here; I later got dominated by two players at once and fell to 4 kills and 21 deaths. The sad part was that until I checked the score screen I thought I was having a pretty decent round. It’s that thought, and not so much the kill/death ratio, that’s telling me it’s time to quit. When I’m dying more then 5 times as often as I’m killing and that feels to me like I’m doing well, I’ve jumped the shark.

I did grab the No-Hitter achievement later in the round for making a capture without firing a shot, but it took me almost four lives to do it. I got into the base and got the briefcase to the battlements before dying. I then got it and ran it to our front door and was killed. I then snatched it up and bolted for our intelligence with someone close behind me, peppering the walls and floor with gunfire. Just as I reached our intelligence and completed the capture – literally, it was less the a second difference - I was killed from behind by my pursuer, revealed to be a spy. That felt like a daring success, but that’s one success against how many losses? Too many.

I may log on for short jaunts now and again but my days of trying to be competitive are done. You win this round, Teenage Mutant Ninja Cyborgs – aka the other players I’ve faced – but I’ll be back in another game, and that one I will win.

And it will be sweet. Later, all