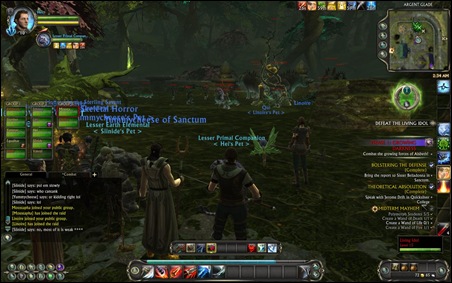 I picked up Rift yesterday and have been playing a for few hours on and off. The first thing to come to mind for me was that the combat didn’t have the oomph that DC Universe Online did, but instead is typical fantasy MMO fare. I helped close my first while going between two early quest zones near a Rudi’s Wagon in Silverwood. Once that was closed another opened no more then a stone’s throw away, which was just silly. While working together with other players was fun and there are nice rewards for it, these rift can also be a pain in the ass. I appeared inside a fiery invasion one near Argent Glade upon logging in, and nature ones later ruined my quest progress in Argent Glade proper, taking the north and sound ends. My avatar is a Mathosian warrior with Beastmaster, Riftblade and Champion souls. Why? I have no idea, they aren’t explained hardly, if at all, before you pick them. I read up on them before playing, which is the only way I knew anything at all about what I was selecting and even then I just knew I wanted the pet to help me fight, some ranged attacks and strong two-handed attacks. That’s it.

Rift can be fun, but how Trion Worlds can make a feature out of having your questing interrupted randomly and calling it ‘dynamic gameplay’ is beyond me. Other games do the same thing, but they just have other players doing it and call it PvP. I’m going to keep playing but there’s allot for this game to overcome at this point and when a game starts in a hole, that’s not a good sign.