Back in the Saddle Again

I apparently can’t keep my word. Well, occasionally, anyway. I was playing Team Fortress 2 again – even after I said I was through with the game – and didn’t do so bad. See for yourself. 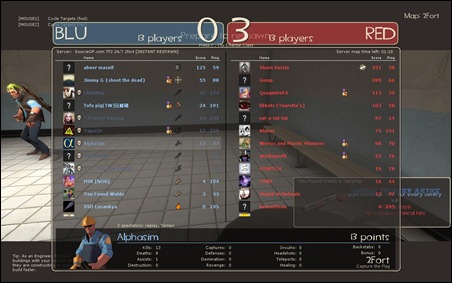 That’s not so bad, for me anyhow. I was an engineer for approximately 30 seconds before the round ended, so despite what you see here my score came from playing a soldier. 13 kills to 8 deaths is the first time in a long time I’ve been in the positives on that ratio. The sad part is that right after this, the next round saw me get dominated by three people at once (that sounds bad when said like that, doesn’t it?) and died every time I stepped out of the spawn room. Our base got flooded by the other team but I in particular seemed to get ganged up on. Fun.
On another note, after my struggles with the replay system, I finally managed to export a video, and even uploaded one to YouTube. Here it is.

It’s really not exciting but the system works, and that’s what matters. That’s all for now. Later, all.
Posted by Alphasim at 5:46 AM