Checking in again, I’ve been working through some more Test Drive Unlimited 2 and playing more League of Legends. 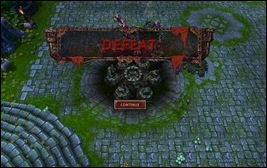 The recent bot change on League of Legends produces a much more challenging match, but it’s not perfect. My biggest complaint is that the bots don’t seem to perform evenly, based on user participation. What I mean is that the bots on my team tend to get leveled when facing the the other team’s bots. Also, when playing Summoner’s Rift, the most common map, when I start in the bottom-left base, the other team usually storms through from the top-left route and gets in my base no matter what. This leaves me with two options: try and push another lane before they can complete their attack or stay in that one and help stem the tide. It would be more entertaining if there was some variance from match to match but every game plays just like the one before it now.
That leads to my second complaint, and that is that the bots still play like bots. You never deal with bots camping in the weeds, they don’t seem to jungle, and once they pick a lane they tend to stay there. Some randomness would do them a world of good.
I’m also well on my way to finishing e-AAGH.net’s rehash. You may remember that the site, when last seen, looked like this.

I’ve gone over the entire look and started again, producing a look like this.

I reintroduced green to the color scheme, slapped together a new logo and cleaned up the layout. I like it better so this is probably how the site will go live.
That’s all for now, everyone. I’ll hopefully be back before March with the finished site. Later, all.
Posted by Alphasim at 4:48 AM